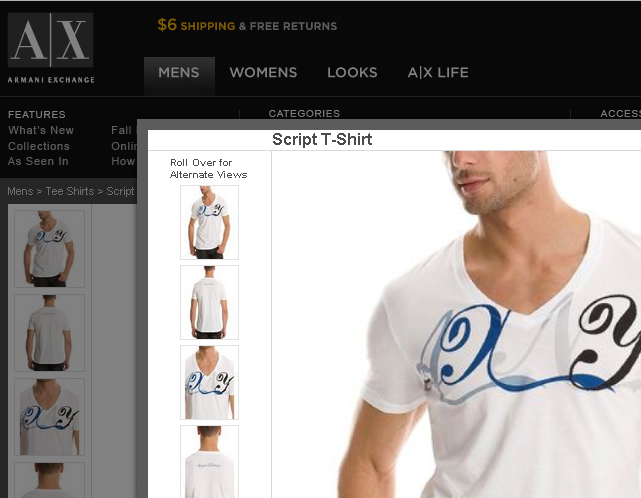 Armani Exchange (A|X) used some of Panamericana’s glyphs in the front of the design of one of their T-shirts.

Myfonts Rising Stars, June 2007:Think pirates, treasure hunts, explorers’ maps, shady contracts, captains’ logs cut short by some intruder or natural disaster. That’s the kind of atmosphere evoked by the ten members of the rich and impressive Panamericana family. The font names are a course in basic Spanish: Blanca, Gris, Negra, Uno, Dos, Tres… Panamerican breathes calligraphy, but also plays around with every kind of grungy distortion that you can think of. Designer Carlos Fabián Camargo Guerrero is from Mérida, Venezuela, and now runs the Andinistas studio in Bogotà, Colombia. Two cities on the Andes mountain range – that’s why the studio is called “Andes people”.

Myfonts Rising Stars, July 2007:Panamericana is a family of rough-and-tumble fonts of calligraphic origin designed by Andinistas from Bogotá, Colombia. Its ten styles offer energetic handwriting in various grades of decay and deconstruction, plus a set of dingbats and flourishes. Having been featured in last month’s Rising Stars, this intriguing set continues to catch the attention of designers in search of an evocative script with darkly romantic overtones.

The blending of each and every one of these styles allows the designer to work with countless grunge characteristics that inject happiness and originality to any word.

All of the 10 fonts include the complete character set with lower and upper case letters, numbers, accents, diacritics, punctuation and monetary symbols. The fonts included in this family are available in the Open Type format and they are Mac and PC compatible.